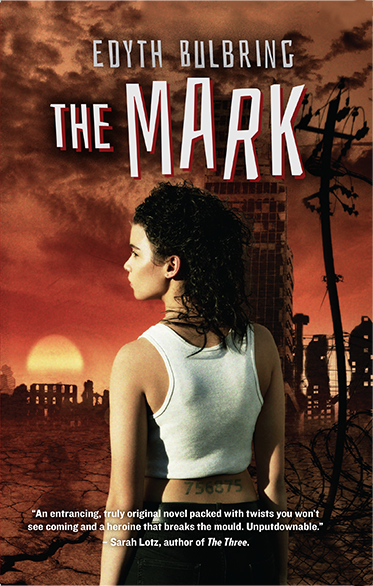 The Mark is the award-winning book of the English Academy’s 2016 Percy FitzPatrick Prize for Youth Literature.

In the future, the world has flipped. Ravaged by the Conflagration, this is a harsh place where the sun beats down, people’s lives are run by a heartless elite and law is brutally enforced. A mark at the base of the spine controls each person’s destiny. The Machine decides what work you will do and who your life partner will be. Juliet Seven – “Ettie” – will soon turn 15 and her life as a drudge will begin, her fate-mate mate will be chosen. Like everyone else, her future is marked by the numbers on her spine. But Ettie decides to challenge her destiny. And in so doing, she fulfils the prophecy that was spoken of before she even existed.

The Mark was published by Tafelberg in September 2014.

The Mark is a fast-paced, gritty and uncomfortable read and Bulbring maintains a cracking pace, blending elements of SF  dystopia with nuances of magical realism. Pick this one up if you’re looking for something slightly different –  Nerine Dorman, Pretoria News

This is the South African fiction we have all been waiting for – Nikki McDiarmid, Puku

A dystopian, futuristic, mystical dark novel with twists and turns that keeps its reader enthralled to the last page. With its examination of a futuristic political system, it would make a great setwork for teenage pupils – Stephanie Saville, The Witness

Bulbring paints a believable society in which steampunk is married to advanced technology. Although there is action and excitement, the focus is on the characters and their emotions, so this is never just another post-apocalyptic adventure story but something deeper and more serious – Aubrey Paton, The Herald